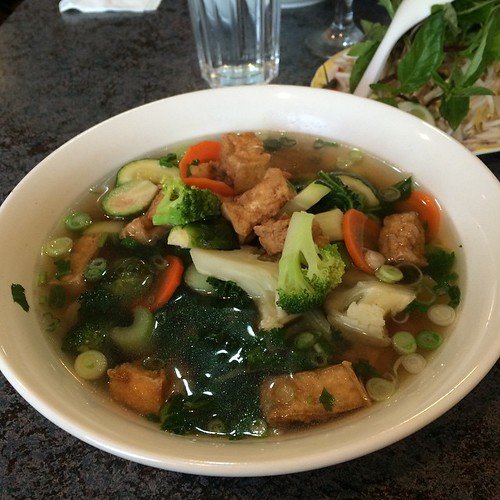 A weekend lunch at the Pho Delight side of the duel Friends and Neighbours (10838 82 Avenue) allowed me to indulge my curiosity about the place's vegetarian pho. This is not to be confused with the Buddha Pho, which is the same thing except spicy. This was definitely one of the heartiest vegetarian versions of pho I have ever had. It included lots of tofu for protein, as well as almost a garden's worth of carrots, cauliflower, broccoli, mushrooms (just a few), kale (the first time I have ever seen it in pho), and brussels spouts. I was a bit leery when I noticed the latter, as I absolutely hate brussels sprouts. However, I bravely put one in my mouth and was surprised by a rich, almost roasted flavour with very little bitterness. That says something to me, that when I can enjoy an ingredient I normally hate then a dish is indeed very well done. There was also quite a bit of celery, which was superfluous as most of it sank to the bottom. The broth was also vegetarian yet rich and flavourful. The noodles were a bit difficult to retrieve at first because of all of the vegetables weighing them down, so as a result many of them broke before reaching my mouth. This is just a minor criticism. Vegan and vegetarian lovers of pho need to try this.
Posted by Paula E. Kirman at 9:55 AM No comments: 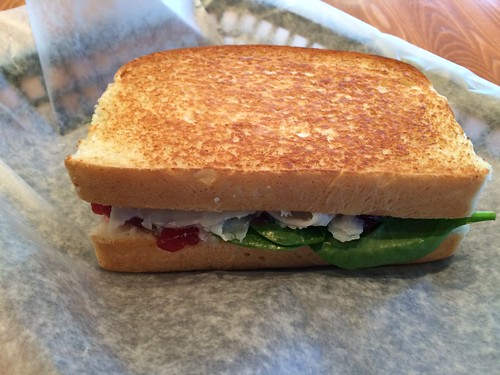 I grabbed a quick bite last week at the university location of Press'd. I normally order the Bird, which has turkey, sprouts, and avocado (I skip the cream cheese). The Gobbler, I am assuming which is a seasonal special, has turkey, spinach, and cranberry sauce (I also skipped the cream cheese). My verdict? There was too much cranberry sauce, and it dominated the taste. I felt like I was eating a sweet spinach salad at some points where the turkey was thinner. If you love cranberry sauce and spinach you'll like this. Otherwise, I am sticking with the Bird.
Posted by Paula E. Kirman at 9:28 AM No comments: 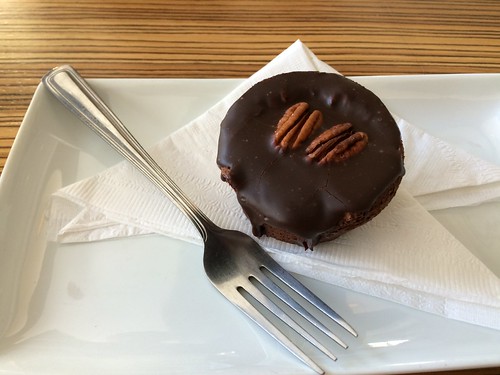 A coffee meeting at Cafe Leva turned into a coffee and treat meeting. I enjoyed what I thought at first was just a chocolate muffin with pecans, but was actually a dense piece of chocolate cake that was almost solid chocolate within. It was also sold to me as vegan, but I found it hard to believe, it was so rich. It was like eating a chocolate bar shaped into a muffin. I was on a sugar high for the rest of the afternoon. And that, my friends, is a good thing.
Posted by Paula E. Kirman at 10:00 AM No comments:

Breakfast for Lunch: Latkes and Gravlax at Mill Creek Cafe 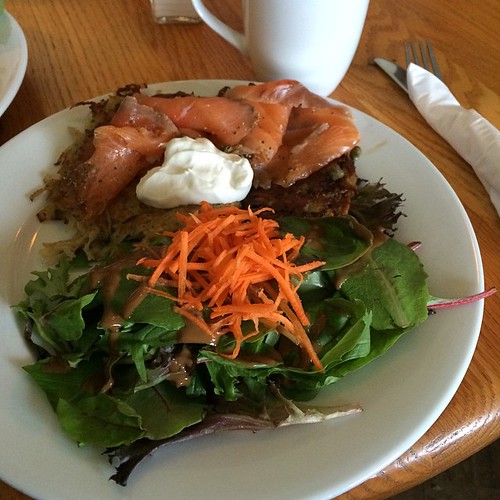 I had a meeting last week at Mill Creek Cafe and as I had not yet had lunch, got there early to order something. I went for an item that I learned is on the lunch menu as well as the brunch menu: latkes and gravlax. To use the term "latkes" as opposed to "potato pancakes" implies a certain degree of, dare I say it, chutzpah. However, flavour-wise, these latkes taste right. They were the right size and texture, as far as the grated variety goes (most places serve them thick and gummy, with semi-raw pieces of potato). Putting gravlax - home made smoked salmon - with latkes is something different for me, but the flavours worked together. Instead of the Boursin soft cheese I opted for sour cream. A side salad with balsamic dressing rounded out the plate. This is definitely what I would call a Jewish fusion dish.
Posted by Paula E. Kirman at 9:15 AM No comments: 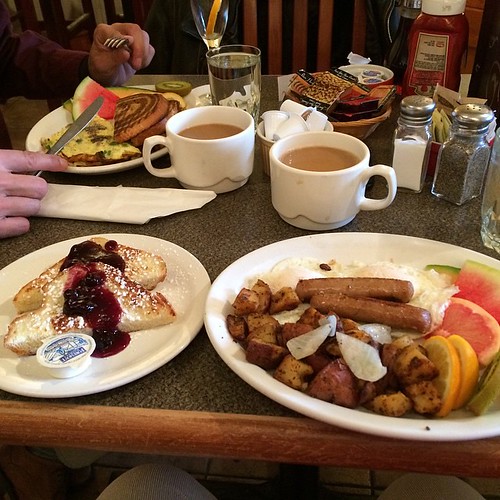 Saturday morning brunch at Artisan Resto-Cafe saw me order the special: two turkey sausages, two eggs any style, potatoes, and a piece of blueberry French toast. It was a good portion, and one doesn't find turkey sausages being served that often. The French toast was not overly sweet, and my eggs were done perfectly. A great way to start the weekend.
Posted by Paula E. Kirman at 8:43 AM No comments: 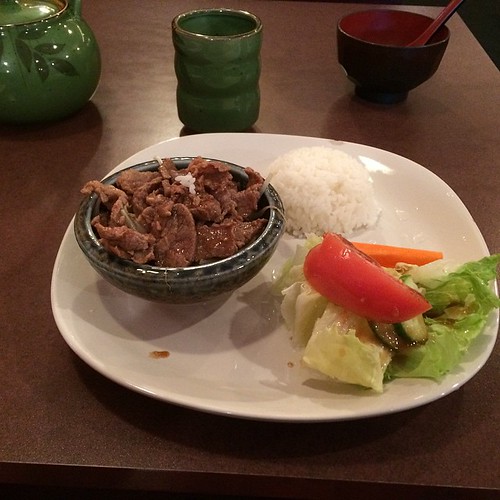 I stopped in to Ichiban (8750 149 Street) yesterday for a quick lunch and chose beef shogayaki from the lunch specials menu. Thin slices of beef were pan fried in a light ginger sauce and served over sprouts (that were cooked in the same sauce). The beef was served alongside a scoop of rice and a salad. It seemed rather light, but was actually quite filling.
Posted by Paula E. Kirman at 8:37 AM No comments:

Vegging Out: Vegetarian Triple Decker at Friends and Neighbours 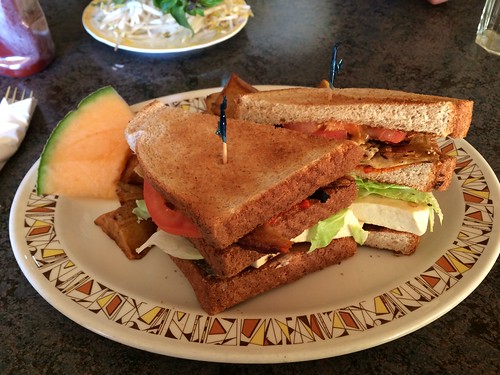 I am starting to make Friends and Neighbours (10834 82 Avenue) a regular habit. Last week I tried the vegetarian club sandwich, which is a huge trip decker stacked with soy bacon, grilled tofu, lettuce, tomatoes, with roasted red pepper spread on toast. There appeared to be margarine on the bread as well - I am not sure if this can be held, as I know the buns and bagels are pre-margarined. The sandwich is too big to fit into most people's mouths. The soy bacon really steals the show, while the tofu was rather bland. I chose the house made has browns as my side. This is a very heart sandwich, but I prefer the veggie sandwich I had there on my previous visit, with just soy bacon, avocado, and spinach on a bagel.
Posted by Paula E. Kirman at 10:35 AM No comments: 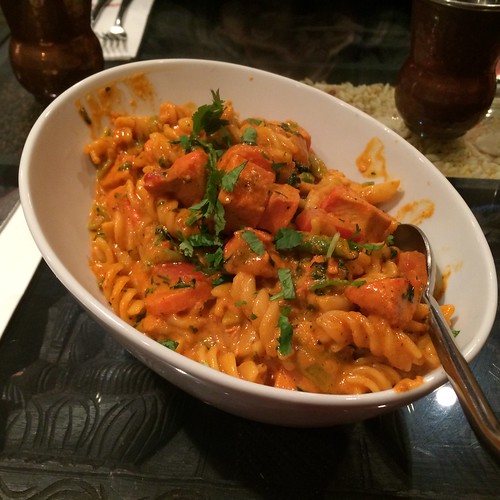 There is not much I haven't ordered off the menu at Naanolicious, but the Indian Arrabiatta Pasta was one of them - until this past weekend. Tri-colour fusili cooked in an Indian butter sauce, with vegetables. I added chicken for an extra $3 and basically interpreted the meal as butter chicken on pasta with vegetables. You can't really go wrong with that - the sauce worked well with the pasta, which was cooked properly, and it went well with a piece of plain naan. Plus, the portion was huge - it was served in a bowl that was practically as a big as a bucket. If you like butter chicken and want to try a different take on the dish, definitely try this.
Posted by Paula E. Kirman at 10:23 AM No comments: 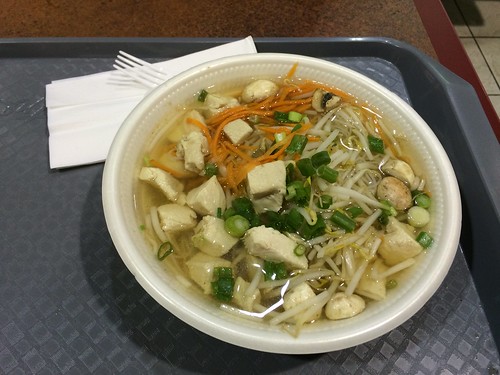 This past Saturday, I had noodles for a cause! Prior to attending a public apology made to an Aboriginal Elder who was wrongly ousted from City Centre Mall by mall security, I had the meal he was likely having at the time of the unfortunate incident: chicken noodle soup from Good Buddy, a Vietnamese fast food outlet in the food court. I used to live on the stuff when I ate there more often. At only $5.69 it is cheap and a reasonably large portion. I would not call this pho, as the broth lacks the depth of flavour for that, but the noodles lean in the pho direction. I find them rather thin and firm in texture, making the soup easier to eat than actual pho.
Posted by Paula E. Kirman at 10:16 AM No comments: 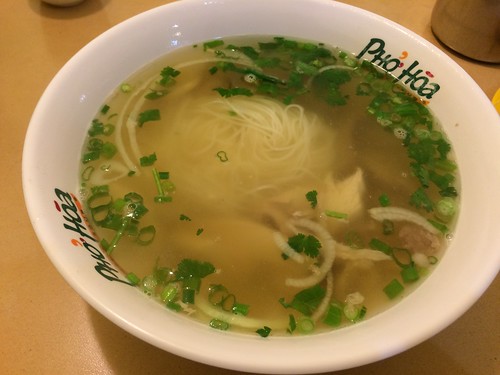 A business lunch at the Chinatown location of Pho Hoa (9723 106 Avenue) last week satisfied my craving for pho. I ordered the chicken pho. The broth was lighter than the beef one, the chicken was plentiful, and the portion large (I ordered a large). Good value and good comfort food.
Posted by Paula E. Kirman at 9:53 AM No comments: 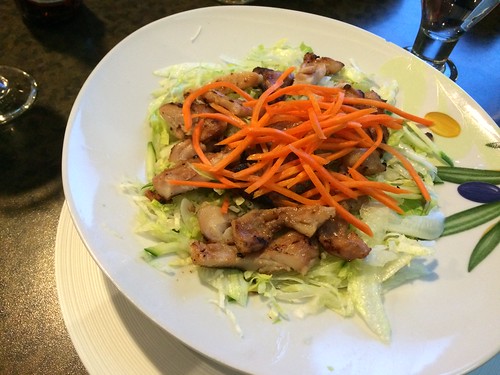 I recently had supper at the south side location of Doans and ordered the grilled chicken vermicelli. The chicken tasted very grilled indeed, albeit somewhat on the preserved side - I think it was pre-marinated. It was served on top of a bed of salad and noodles. The salad was right under the meat, which is different arrangements from other vermicelli bowls, which usually as the sprouts and lettuce on the bottom. It was a light supper, slightly more expensive than a Chinatown noodle house.